Wouldn't you know it. When you least expect it there is going to be a project that requires your time and budget and it isn't planned. Ours was the kitchen faucet today. We've had problems with our dishwasher and have determined that it can't be fixed, because a new dishwasher isn't in the budget, we are kicking it old school and hand-washing. I know, archaic! We thought that because we stopped using the leaky dishwasher that the musty smell that had developed around the sink would go away once things dried out. Guess what...it didn't. So today further investigation proved that our faucet was broken and little by little water has been leaking under the sink causing the funk. 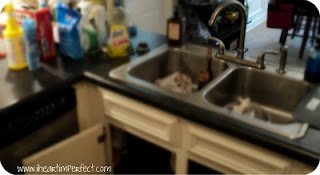 Unfortunately, there was no fix. Because the leak was getting pretty bad we had to bite the bullet and buy a replacement faucet. Ouch! That $100 expense was not in the project budget. 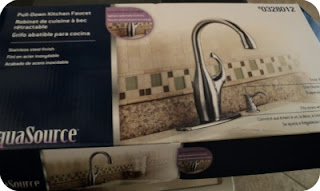 A good tip when deciding on these types of fixtures - read the product reviews. Lowe's has them on their website and they are helpful in navigating through the really crappy ones to the decent ones. We decided that since we were going to have to replace the faucet that we might as well get what we want. Something taller with a pull-down faucet. Lemons into lemonade! 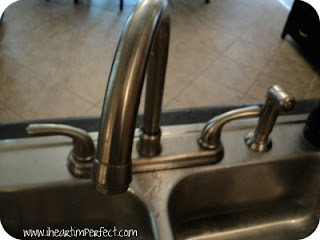 Pictured above: The original, traitorous faucet that only lasted about four years. I guess having kids pulling on it from behind (a pitfall of not having a sink against a wall) and us having to lift it up to fit large pots and the doggie water cooler just did it in.

Might as well take advantage and get a good scrub in.

Installation of the new: Read, read, read the instructions. Jason is a super handy guy and can pretty much fix anything, but he does not like plumbing projects and defers to the manual every time. It's also helpful to have a helper for a job like this. Once you're on the floor and in the cabinet, it's kind of a pain if you need a tool or something. I'm the helper.

You'll see in the photo below that we have bowl under the sink....the water cut-off valves are prone to leak (ours did) so the bowl catches the excess water, making your drying out process a lot quicker. 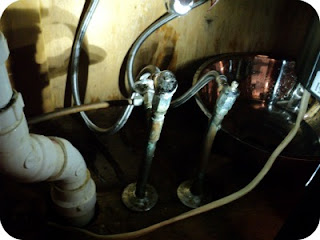 Once the new faucet was installed, nuts and washers super tightened and some additional silicone rubbed around the PVC fittings (for extra assurance)....it was time to get our drying on. I'm a lucky girl because my hubby has all sorts of cool toys. Need something dried out quickly? Use a heat gun. 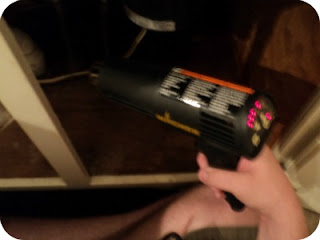 Finally, after the headache of an unwanted, non-budgeted for project....we have a cool new faucet. Bonus for our troubles.....a little soap dispenser that mounts under the sink. 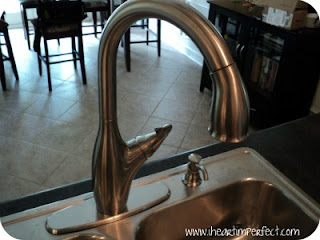 Two thirty-somethings who love to go junking and have a vision for the imperfect. Hang with us and you'll see what can be when you look beyond the fugly!